Carlos Mejia ’17- Over the course of the trip we have went to a variety of places that have been influenced by African culture. During the first day we went to Sapelo Island, where we found the Gullah Geechee: a combination of different African American cultures in one area. I learned that the Gullah were originally Muslim and were forced to adopt the religious Christian Beliefs do to Slavery: resulting in a mostly a Baptist belief system. The evidence was in the cemetery that is how the graves were set up: Muslim graves were facing the east and Baptist were facing the left (I would assume out of respect for the Muslim culture). 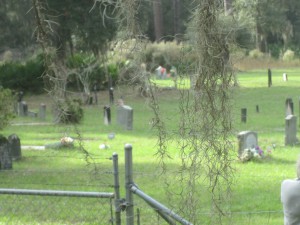 As for the next day we went and witnessed a Southern Baptist seminar, which contained some interesting aspects. I noticed that when the seminar starts all men stand up, and are prayed to be kept safe. However, the women weren’t at all prayed for, it looked as if they are just acknowledged but not kept in their prayers. The seminar was very interactive; a really cool aspect was how he pastor was keeping the people or followers participation in the seminar alive. I also liked how the people were very welcoming throughout the entirety of our presence (Wabash Students) as a guest. Later on we continued on a tour explaining the significance of the churches setting. For example, the church is a property not owned by the state, and other houses in Savannah are the same: the symbol of this property are houses with red doors. Another example, the heavenly like interior of the church (light blue walls, cathedral like windows, etc.) are used to prevent evil spirits and or demonic entities or evils from entering the church like a spiritual barrier. 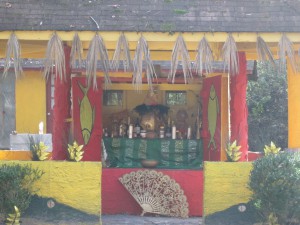 A shrine for the orisha, Oshun

And finally, we went on onto visit Oyotunji tribe. Once we made our way to their tribe they described and showed us what their beliefs were and what the functions they had. Their Gods are deities whom are rooted. They each hold a position that contributes to the elements of the planet we live on, and fight for our lives in ways that are out of our control. The Oyotunji hold sacred shrines for their deities, serving them food or offering objects of value. For example, Oshun is offered fine wine and adores beautiful objects that are shiny or made of the valuable treasures. She sacrificed her beauty the one thing she adores most of all to let the rain return to the earth. Oshun’s shrine was one of the most amazing things to see and hear about. These events and places were priceless and remarkable to witness for myself. I am thankful for the opportunity Professor Morton and Wilson provided me with this Thanksgiving break.