Shariff Harrison ’16- What does it mean to be genuine or truly sincere in today’s society? Today, I found myself in a state of confusion while internalizing and determining the difference between people’s intentions behind their actions and words. While visiting the African kingdom of the Oyotunji, located in South Carolina, I was quite surprised on how organized and educated the people of this culture were. Their village consisted of shrines and temples dedicated to their Gods (Orisha), an education full of agricultural skills and a good amount of scaffolding embedded within the culture itself, as well as other rudimentary foundations that could be found in America. The Oyotunji was created to preserve the heritage of Africa after having their identity stripped away from slavery. This village was genuine and sincere in their actions and I was able to witness this by the manner in which the people carried themselves and how they interacted with each other and the class. 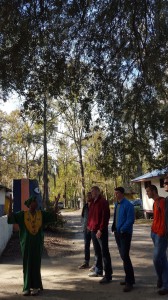 During our visit, we were hosted by a recent member of the community and spoke with the ancestral/elder priestess and the king of the Oyotunji. Our host was fairly new to the community and did an excellent job showing us around to get a general understanding of how one would live in the village. Although, we had a great hostess, the most significant part of these interactions were the talks with the priestess and king. The priestess opened up a new world of connections, explaining and inviting us to explore the concept of living through our ancestors past. She had cast a tone of confusion and induced a trace of deep self-reflection of character upon students by asking “Why are we here having this conversation about our ancestors?” The priestess challenged each of us to learn the story of our ancestors as well as the truth behind history because of its bias or “happy and willing” aspect (i.e. Christopher Columbus and the Native Americans, Slavery, etc.). Following the priestess was the king, who was very knowledgeable and aware of the current events and structures of today’s society that spoke about the heritage and development of the Oyotunji. I enjoyed these interactions because I have never heard of a king humbling himself and setting aside his duties to speak with guest. I also enjoyed hearing the dark but painful truth about what actually happened during these times of celebration for one people and despair for another.

These interactions and talks were loaded with information about the slavery and religious intermingling. However, I find it extremely difficult for people that are observing a culture from an outside perspective to understand the cultural differences that are presented. I also find it difficult for these same people to discredit one’s culture because of these differences. This make me wonder if they truly care about what was sacrificed for them to make these things possible. Are these people sincere when they shake hands? Are they sincere when they say that they’ve enjoyed their time there? With recent events and movements spurring out of rage and oppression, I continue to struggle to identify whether people in the media and everyday life genuinely care about what is occurring or just want to take the role of good guy to fit in. Like the king said, “actions speak louder than words.” It’s the actions that count, words mean nothing and will continue to go in vain or unnoticed until someone takes initiative.