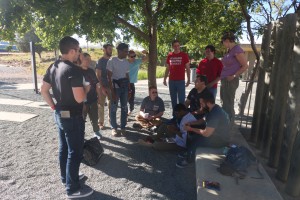 Discussion and unpacking after an emotional tour of the Apartheid Museum.

Zach Greene ’16 – I got my privilege checked at the Apartheid museum in Johannesburg. In a stroke of genius, the creators of the museum made two entrances. Through random selection, your ticket to the museum is either labeled ‘white’ or ‘non-white.’ The entrances lead down to separate corridors and then back together. After walking up what seemed to be an endless ramp in the ‘white’ entrance, we reconvened with our ‘non-white’ classmates and shrugged off the entrance to the museum. However,the entrance ended up leading to my largest takeaway of the day. While my ‘white’ classmates and I were trekking up the ramp, our ‘non-white’ counterparts took the stairs. Neither of us realized the difference until a class discussion highlighted the dirty details. The museum was able to replicate the conditions of Apartheid that once dominated this beautiful country. 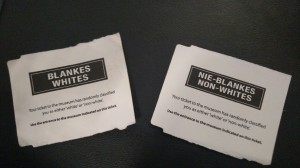 Tickets were randomly assigned a race – white or non white – to give a sense of Apartheid era segregation. Entrances were different.

Whites were not only privileged in using the ramp, but alsoin not knowing how disadvantaged the ‘non-whites’ were.

Now imagine a world were all the advantages  are given to whites and the disadvantages to non-whites, this was South Africa. I have always known there is inequality in the world. Like many other parents, my mom and dad taught me to watch out for injustice and stand up for what is right. However, my eyes were quickly opened when finding out the differences in entrances to the museum. I realized that despite being vigilant of inequality there are still injustices that go unnoticed and uncorrected.