Nick Frye ’16 – One thing that I would like to mention about flying in South Africa is the lack of security, compared to an American airport.  Once we had checked our bags and received our tickets we went to the security line that took no time at all. 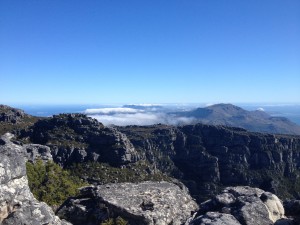 An incredible view of Table Mountain.

At the end of the security was a single metal detector and an X-ray machine for bags.  Before proceeding through the metal detector the only thing I had to do was empty out my pockets.  I was beginning to take of my shoes when the security guard just said no and waved me on.  Like I said before this lack of security at the airport is strange to an American.  It is also strange because security is a huge factor here. Almost every house here has either barbed wire, electric fencing, or bars on all of the windows.  There are also security guards who stay outside at night to make sure specific properties are not broken into. 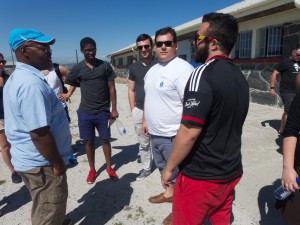 Talking to a former political prisoner of Robben Island at the prison itself.

Once we arrived in Cape Town we quickly proceeded to check into our guest house and then went on our way to one of the seven natural wonders of the world, Table Mountain.  Table Mountain is impossible not to see from any point in the city.  It stands at 1,086 meters at its highest point.  To reach the top we used a cable car that can hold 65 people and its floor slowly rotates as it ascends. The cable car service has been officially operated since 1926.  Once on top of the Mountain you receive a view like no other over looking Cape Town, False Bay, Robben Island, the Atlantic Ocean, and if it was not for the clouds rolling in, The Cape of Good Hope.  It is truly difficult to describe the feelings that one gets on top of the mountain.  My only advice to you is just go.