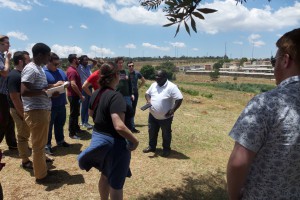 8 – On Our first full day in Johannesburg, we were greeted by birds chirping, bright sun, and a bit of jet lag. Warm breakfast, hot coffee and an introduction to the happenings of the day. Our tour guide, Malefi, talked to us about how he became politicized at the age of 13. This day was marked deeply by contrast –contrast between black and white and poor and rich. We’d leave our guest house, in Melville, an affluent suburb of Johannesburg, and drive towards Soweto, the township from which Nelson Mandela is from and the township that was ground zero for the 1976 student rebellion. Melville is predominantly white. Soweto is predominantly Black. It’s as if the color of poverty in South Africa is black. We saw the World Cup stadium a beautiful structure in the shape of a traditional tribal drinking bowl built to house the world’s largest and most expensive soccer competition. Maelefi told us that this didn’t bring many jobs for Soweto residents. Fifa uses “volunteers.”We saw the township engineered to be pitted against the mining compounds deprived buildings covered up by new developments to hide the poverty.We passed by Shanti towns on our way to the Regina Mundi Church– hogs by the river that floods it when it rains too much. The Regina Mundi church was a place Black South Africans organized for liberation for when the police came in, they could convert the organizing meeting to a church service. In class we learned and read about apartheid –separation and subjugation based on race. In post-apartheid South Africa, we saw the poverty that is a product of the past and also sustains it. Malefi told us that as much as the constitution has been a blessing –the ZA constitution being the most liberal in the world — it doesn’t change lives. Which got me thinking about the United States in comparison with South Africa. For as much as things change, things often stay the same. In the United States, Jim Crow (the set of U.S laws meant to separate and subjugate based on race) was said to end with the Civil Rights Act of 1964. But the remnants of it –mass incarceration, deprived Black communities, child poverty, and other forms of state violence — still exist and destroy families. Likewise Apartheid was said to be over in 1994, but the remnants still exist and destroy families – And that’s just that, families live in –people live in– these deprived communities. Families are affected by racist policies and divestment. We’ve learned to see this, I believe, to focus on this (the affect on families) in our analysis of texts and history. 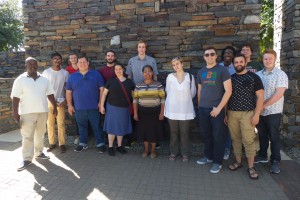