Truman Jones ’16 – The final trip to Chicago was initially one of the more intimidating things I had ever been pushed into doing in my Wabash experience. Now a day trip with family or the trip to Chinatown for dinner was one thing, but staying for a full week in the city was daunting to say the least. But as the time approached I got less nervous, and after the day trip and meeting my host teacher for the first time, I was definitely less anxious to undergo the trip. 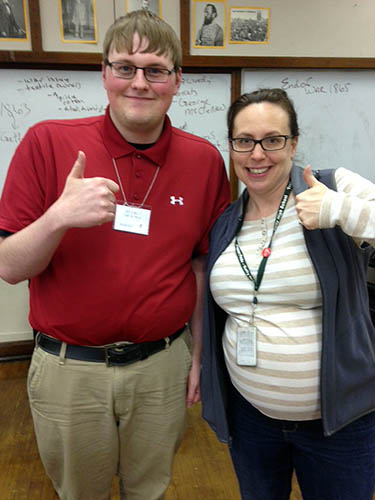 Truman Jones ’16 with his host teacher.

Part of getting your teaching license in Indiana requires you to have at least three full days of teaching experience in an urban environment. I was placed at Kelly High School that is one the southern side of Chicago. Kelly High School has just over two thousand students, and is primarily Latino, with Asian ethnic backgrounds making up the next highest amount, with everything else in smaller numbers. Now this is much different than what I was used to, as the school at Crawfordsville I taught at was around a third of the size, it was also primarily white. So that has been the first real hurdle that I had to get used to be that I was no longer part of the majority, but suddenly put in the minority. But beyond that, the ideas that I had stuffed in my head about big city life, the urban school, and the people in it have been dashed. I have been welcomed with open arms.

My host teacher: Mrs. Zamora, was just one of the friendly staff members at Kelly High School that helped me understand the unique challenges and opportunities that is required to teach in urban Chicago school. I thought that it would be uninterested students, and blank stares, but I found that students were active, excited, and willing to talk. They were eager to know more about me, and I am saddened that I am not staying for longer so I can better get to know them.

In summary my experience has been that despite what anyone can tell you about Chicago, its schools, or its people, you can make any judgments unless you experience it for yourself. The city was/is not the most terrifying thing that exists in the world, the people are not rude and unhelpful, and the schools are not seedy and riddled with gang activity. I would say that stereotypes and ideas are meant to be broken, and thanks to my time at Wabash, I was able to experience it for myself.