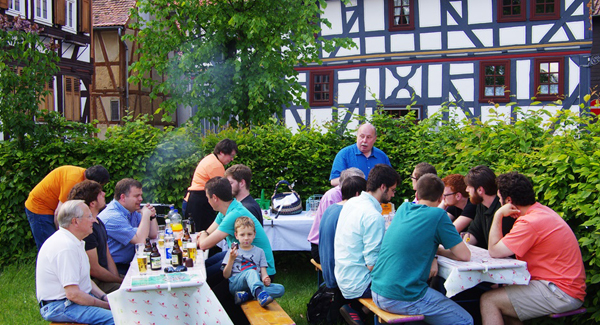 Steven Peters ’16 – Traveling to another country, one tends to have certain expectations going in about the people of that country. Ask most people in the USA what they think is typical of the German people and likely their answers will be fairly similar. Germans are a lederhosen wearing people, throwing around large steins of beer, their vocal inflections carry an underlying hint of anger, and all they eat are large wursts (sausages). My younger sister even feared that I would face many rude Germans, because apparently they are a mean people. After studying the language and culture for two years, one comes to find that those stereotypes are not necessarily true. Despite that education, however, there is still that hope that some of those stereotypes will be seen. A benefit, then, of an immersion trip like this is to discover for yourself, by mingling with the people, what is in reality typical German. 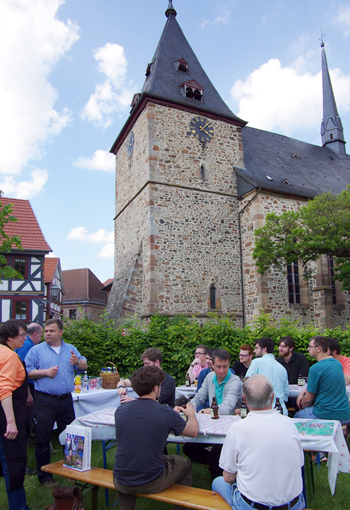 Our trip to Neustadt, a small town near Marburg, gave me and my fellow classmates an experience which allowed us to see who the Germans really are as a people and to practice our language skills. Through connections that Erik Kile has with Neustadt residents, we received a personal tour of the historical sites by two local historians. One of them, Gerhard Bieker, hosted Erik’s aunt as an exchange student some 30 years ago, and the families have been close ever since. Herr Bieker quite literally wrote the book on Neustadt’s history (entitled Nova Civitas: Eine Wanderung durch die Geschichte der Stadt). Through him we gained full access to the curious 15th-century “Junker-Hansen-Turm” (tower) that looms over the town. He also got us into the old town hall and gave us a tour of the most historic parts of town. Another friend, Herr Krapp, gave us a tour of the town’s oldest Catholic Church (built between 1502 and 1517). He led us through the small space behind the high altar, took us up rickety stairs into the attic of the church, and showed us the air pumps that drive the organ. We got a more personal view of these old sites than one can typically get in more popular sites in tourist-filled cities.

After our tour we were greeted by Thomas Groll, the mayor of Neustadt, and our hosts grilled kilos of wurst supplied by the local butcher. A reporter took our picture with the mayor and the historians who guided us, and an article about our visit will appear in Oberhessische Zeitung, the region’s largest newspaper. This part of the trip to Neustadt was the most memorable and useful part for me in experiencing German culture and practicing skills used in class. Our generous hosts fed us wurst after delicious wurst and we were able to converse with the mayor and others in a stress free environment where we were not worried about saying the wrong thing or not being understood well enough. While some of us lingered over apple strudel, some of the group joined a group of local teenagers in a game of pick-up soccer at the adjacent part.

So what is typical German? It is impossible to fully understand a people after only one week living within their culture, but from what I experienced the Germans are a people who seem reserved on the surface, but if given the chance will show you the greatest hospitality, even if they do not know you, and fill your stomach with good food and your head with good conversation. We may not have seen any large Germans with a beer in one hand, and a rope of wurst around their neck, but what we did receive was a greater understanding of who the Germans are as a people and an opportunity to become more knowledgeable as a whole. –