Paul Snyder ‘16 – As our German 202 immersion experience hits the one week mark, I pause to think about some of the things I have learned so far: 1) I often feel like I don’t know what I am doing. 2) Even the doors are different here. 3) There is more to Germany than beer and wurst. Although my first week trying to speak German in Germany has at times been difficult and frustrating, my overall impression is that the Germans are a very accepting people.

Today after our morning language class we hit the streets to learn about the Jewish history of Marburg. We began at the ruins of a synagogue that was built around the year 1319, but just 30 years later it was torn down by angry residents who blamed the Jews for a plague epidemic. The ancient excavated sanctuary is now a memorial, and we lingered there for a long time to discuss our text about Jewish Marburg. Like most people, when I thought about the Jews in Germany the first thing that would come to mind is the Holocaust, for obvious reasons. However, here I learned that the history of the Jews in Germany goes back much, much farther—and the discrimination against them does too. 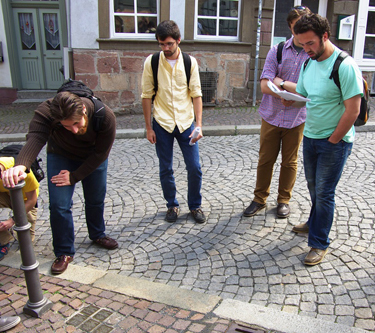 During the reign of Philip the “Magnanimous” in the 1520s, laws were passed that prevented Jews from owning houses or land and restricted what jobs they could do. These laws were in many ways similar to those passed by the Hitler regime in the 1930s. This shows that the murderous policies of the Nazi era had their roots in a long history of discrimination, not just in Germany but throughout Europe.

In many German cities, including Marburg, you can find on the sidewalk small brass squares called “Stolpersteine”—stumbling stones. They are a memory project created by the artist Gunter Demnig to commemorate the lives of victims of the Nazi regime. He engraves the name and fate of a victim in a brass block about the size of a cobblestone, then sets it in place in front of houses where that person used to live. The idea is that a person walking along the sidewalk “stumbles” over the stone and remembers the person who could have once been their neighbor.

Each of us was assigned an address that had a Stolperstein in front of it, and we had to find it and gather the information prior to today’s discussion.  My address led me to a grouping of 6 Stolpersteine that memorialized members of the Katz family who were sent to an extermination camp in Sobibor, Poland. The Katz family was murdered because they were Jewish, but we saw other stones for people who were killed for speaking out against Hitler, for listening to foreign radio stations, for being on the wrong end of the political spectrum, or for being schizophrenic. Although we can learn about these things in a classroom, it cannot have the same impact as standing at the front door of a Holocaust victim, seeing their pictures, hearing their stories, and visualizing what their life and death must have been like.

This dark history could easily lead one to argue against my earlier comment that the Germans of today seem to be a very accepting people. But daily life in Germany quickly reveals a commitment to tolerance and social justice. Not only do they very publicly confront past atrocities through memorials, commemorations, and public dialog, but they have enshrined into law the concept that modern Germany will be a safe haven for people who are oppressed because of things like faith or ethnicity. The immigration policies are also fairly generous, so on practically every corner there are shops marketing food and merchandise from many different nationalities. As further evidence, we ended our tour of Jewish Marburg on a positive note at the new synagogue, which currently serves a congregation of about 500 local Jews.

So where does all this reflection on contemporary Germany lead me? Well, for one thing I know now not to get too discouraged when I freeze up while ordering a Döner Kebab because the guy asked me what toppings I want on it, or when I can’t even figure out how to get into the bakery because the door doesn’t work like I think it should. Someone might laugh at me, but someone is more likely to kindly offer the help that I need. For all of the anxiety and missteps that I and our group made when we first got here, we are now successfully navigating German culture—with a little help from the people we interact with on a daily basis.

At Wabash we hear often that immersing oneself in another culture is the best way to learn about it. I agree 100 percent. This experience has opened my eyes to different cultures and has given me better insight into how the world works than I could have gained just in the classroom.