Erik Kile ‘16 – Prior to our arrival I wasn’t sure what to expect from this immersion experience in Marburg. I had been to this region of Germany last year to visit family, and when I was with them everything was comfortable and relaxed. On this trip I have had to rely more on myself to use German in everyday situations. The first day we were here several of us had a rough time just trying to order food at a Döner Kebab stand. But now, after a few days of dedicated language practice it seems that everything has opened up for us and we are able to apply what we learned in the classroom at home to a real world setting. I am now able to converse entirely in German with my family and friends who live nearby in Neustadt. 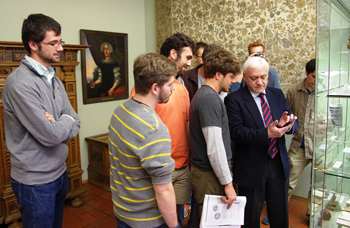 Learning more about Landgrafenschloss in the museum.

We have also been experiencing the rich cultural history that Marburg has to offer. We’ve seen a plethora of historical sites throughout the city that escaped my attention when I came through here last year. Professor Redding led us on a tour of the Elisabethkirche, which some people claim is the oldest purely Gothic church in Germany. It was built by the Order of Teutonic Knights to honor St. Elisabeth, who gave up her rich life as Landgräfin (duchess) of Thuringia to care for the poor and the sick. She basically worked herself to death and was canonized in 1235, just four years after she died.

Yesterday after language class and lunch at the Mensa (student cafeteria) we visited the Landgrafenschloss, the castle that dominates the skyline of Marburg. We studied the castle inside and out, and learned about its role in the development of the city. In fact, Marburg takes its name from the castle, with “Mark” being an old German word for border and “Burg” meaning fortress or castle: Mar(k) + Burg = Marburg. In addition to its role in the birth of the modern German state of Hesse, the castle also hosted the famous Marburg Colloquy, a theological discussion between Martin Luther and Ulrich Zwingli. The meeting did not go well and essentially solidified the split between the Lutheran and the Reformed wings of the Protestant movement.

It was well after 5 p.m. by the time Dr. Redding turned us loose, but several of us still had enough energy to grab some supplies at the grocery store and hike to the top of the steep hills opposite the castle, where we picnicked and enjoyed the spectacular view of Marburg. We are less than halfway through our stay and already we have a lot to reflect on, and a lot to still look forward to.