Stephen Sklar ’15 – In Political Theory one can use architecture to provide a sense of place and time where ideas were originally produced. Difficulty with this method naturally arises when the architecture is changed or renovated. After observing the Chartes Cathedral one may encounter this difficulty. The new painting of the sidewalls in the back of the cathedral, which in turn redefines what something meant to be gothic, causes this conception. With this new belief one can also take a different view on the royalty’s use of power.  French cathedrals all possessed many of the same qualities. 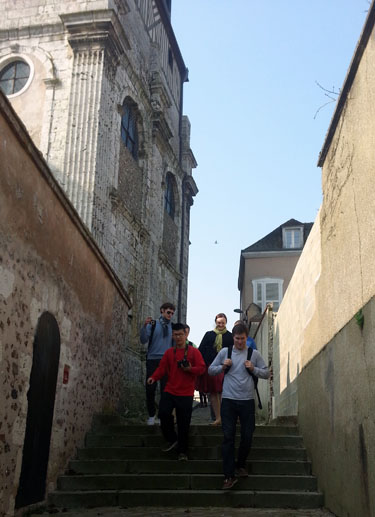 When the standard person reflects on a vision of a gothic cathedral, one will most definitely think of dark shadows and large grey stones. With their use of light, many gothic cathedrals possess a feeling of mystery and sometimes almost fear.  Some remark that the dissolution of light from the stain glass projected on the walls creates an atmosphere of unity or oneness. This theme, which one can draw from the gothic cathedrals, can be transferred to themes in Medieval Political thought. However, all this changes when someone introduces color to the walls.

Chartes does not possess unity; it is just another pretty church. Chartes Cathedral’s treatment of light is almost unnoticeable in the front of the church. Although, the windows are beautiful, the soaring magnificence of shadow from the floor on upward is lost due to the reason of the pillars flanking the center of the church are now painted in a brownish color. For this single reason one could postulate that the Chartes Cathedral new coloring made it lack the gothic feel.  If this is to be true then the modifications of the cathedral have desecrated this once gothic church and transformed it into something else. Yet, to one’s own surprise the painting of Chartes is mimicking how it was decorated in the 12th century and throughout the medieval times.  So what truly is Gothic?

The common view of the medieval is skewed. Most people conceive that the classic gothic church is a dark dreary place to  its lack of paint.  This derives itself from the churches presentation in the modern day as paint lacking. In spite of this, the medieval Gothic church actually was painted fully and the shadow and darkness that most people preconceive in their minds of the gothic is only a modern notion. This in turn forces one to rethink all of medieval political thought.

Cathedrals among other symbols represent France. The cathedrals were a conduit for emotion and thought including that of political actions by the ruling kingdoms such as, the coronation or the funerals of the ruling class.  One could immediately assert that there is a massive difference from celebrating the royalty in a dark place without paint to a beautifully painted cathedral. The effect on the individual would be me more calming and festive than that of pure subjection to the royals. The gothic cathedral can now be thought of as a more joyous institution.  The painting in the gothic church actually makes sense if one asserts that the royalty, to bring joy to their followers and to provide a beautiful place to contemplate and feel secure did the painting on purpose.

One must change their notions about the gothic as a truly mysterious institution to that of a joyous place subtly showing subjection.  One can make this notion for the reason that the preconceptions of the gothic being dark do not relate to the church’s origin being painted and bright. This impression changes one’s view on the purposeful actions of the royalty and their desire to remain in power.