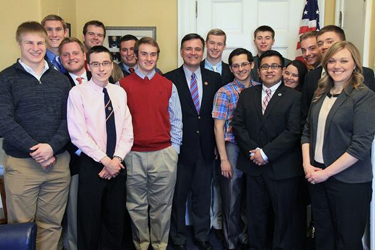 Tyler Regnier ’16 – Today was our last day in D.C.  To start the day, Kyle Stucker ‘17 and I toured the Library of Congress.  The tour guide enlightened us with hidden insights about the meaning of the elaborate murals and carvings that fill the Jefferson building of the library. The designer wanted to build something as grandiose and ornate as a European structure, in order to show the European world powers in the 1800’s that the United States could compete with them.  The space certainly conveys power by aesthetically overwhelming one’s senses with massive marble columns and vivid and colorful murals.  The design of the building not only conveys the political power of our nation, but also the power and value of knowledge.  The Great Hall and the Main Reading Room feature murals and sculptures that speak to the different subjects housed in the library.  From corner to corner, the building is filled with symbolism.  For instance, the golden light fixtures at the main entrance to the building have thirteen bulbs to represent the thirteen original states.  Being the first building in D.C. to be wired for electricity, people came to the library just to marvel at the light fixtures.

After lunch we met with Representative Luke Messer (class of ’91) in his office on Capitol Hill.  I think it’s safe to say that the whole group enjoyed sitting down to chat with him.  He gave us a perspective on working on Capitol Hill, trying to balance family and work, as well as keeping his presence in Indiana while in Washington.  As Wabash men often do, we felt a sense of camaraderie as he told us of his days at Wabash as a part of the Wabash football team and a member of Phi Delta Theta.  After our meeting with Representative Messer, we met with Prime Policy Group, one of D.C.’s first truly non-partisan lobbying agencies. 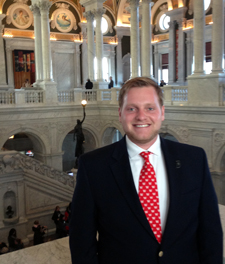 Regnier at the Library of Congress

Library To end the day, I visited the major monuments of D.C. with Dr. Karl Grimmer (class of ’03) who now resides in D.C.  The monuments were majestic at night, especially the Jefferson, brightly lit with the wind whistling through the pillars and the sound of the water lightly crashing into the dam.  The Lincoln seemed to really speak to his power and the effect he had on our nation.  With its grand columns, slightly resembling the Parthenon, and the massive, gleaming white statue of Lincoln himself, the monument conveyed his graceful power and immeasurable influence on the U.S.  Almost equally as powerful, was standing in the spot where MLK gave his “I Have a Dream” speech.  With Lincoln over my shoulder, looking out at the moonlit mall where thousands gathered in hope of justice, I got a sense of the pivotal moments in civil rights that have happened in our nation’s capital.  It helped me realize how fitting it was for MLK to give the speech from the steps of the Lincoln memorial, because the only other man that had such a strong and positive effect on civil rights in the U.S. stood right behind him.