Professor Warren Rosenberg – I want first to thank Prof. Bob Royalty for inviting me on this immersion trip to Israel, and thank him as well for the terrific job of planning he did. I have led three Wabash immersion trips and know what organizing one entails, and mine were to a United States location. The complexities of planning a trip to the Middle East are far greater, and while the trip has another day to go at this point, I can label it an unqualified success. How do I know? I can see it in the students, and I can see it in myself. 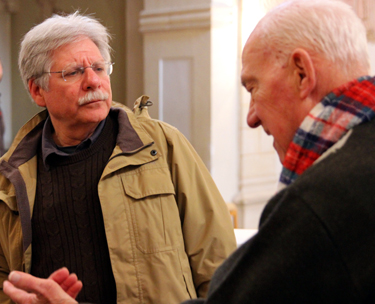 Let me contextualize my remarks by saying that this is my first trip to Israel, after being born one year after the country was founded n 1948. As the only Jew in the group, I have a unique perspective on the trip. My attitudes have been shaped by growing up in a Jewish American household, with three grandparents who were immigrants from Eastern Europe. (My maternal grandmother was born in the US, but her parents were from Europe). I grew up thinking that if they had not made the decision to come to America in the early 1900’s they would have almost certainly been killed in the Holocaust. I, like many American Jews, was strongly influenced by reading the novel Exodus and seeing the 1960 film, both strongly romanticizing the Zionist enterprise. And while I grew up a somewhat practicing Jew, attending Hebrew school, having a Bar Mitzvah and attending synagogue on the High Holy days, I have abandoned practice but still feel a strong Jewish identity.

So coming to Israel with a group of Christian students (with only one non-Christian student) and a religion professor who teaches the Bible and early Christianity is interesting in itself. It has been fascinating to watch our students being exposed to the sites that are religiously meaningful to them, as well as to the sacred sites of Judaism and Islam.  Visiting Haifa, the stunning Sea of Galilee, Jericho, and Jerusalem have been powerful aesthetically, historically, and emotionally. Our morning on the Temple Mount, having the very rare opportunity as non-Muslims to enter the Al-Aqsa Mosque and the Dome of the Rock, was an experience that I know all of us will long remember.
Yet the key to a truly successful immersion experience lies in meeting and interacting with people, and it is here that Bob’s planning has borne the richest fruit.  We have spent the most time with our tour guide Habib, a Christian Israeli Arab, who embodies the incredibly diverse identities that it seems like everyone in Israel shares.  Because he is a Christian, his passion and deep knowledge really emerged as he took us to all of the sites associated with Jesus. But he has also shared with us his experiences as a Palestinian living in Israel, the humiliation he feels when stopped at a checkpoint, and the clearly strong feelings he has about the land and his people’s connections to it. We have met bright and interesting Israeli students–Arab and Jewish–at Haifa University, articulate and passionate Palestinian students at Bethlehem University in the West Bank, and an equally articulate and passionate Orthodox Jewish couple (he from Cleveland and she Connecticut) who met on a trip to Israel, fell in love with the place and each other, and decided to stay, who invited us for a wonderful Shabbat dinner in their home.
Our students have been completely engaged in all of these human interactions, as well as those they had on their own in each location. I see them processing these stimulating experiences on the bus and at meals. They are thinking about their own identities, about sacred texts, and they are thinking about the difficult political realities that are facing this country and region–even as fighting has erupted this week in Gaza and today on the Lebanese border. The “contested sites” of the course’s title are anything but purely academic, as they are learning each day of this trip.
For me, even at my age, the complicated processing of identity has been re-kindled by this trip. I am drawn to the Western Wall, where my grandparents would have given much to be able to pray, to the sites where King David lived, to Yad Vashem, the almost overwhelming Holocaust museum, and to a country with a Star of David on its flag. But when I see the other wall, the one that brutally separates the Palestinians from portions of their ancestral lands, I become upset and troubled. I think of the young Palestinian university student who wanted to talk with me about The Great Gatsby when she heard I was a literature professor, but who cannot travel freely to visit friends or family outside the West Bank, and who is restricted from seeking a job in the thriving Israeli economy just beyond the wall after she graduates, a person for whom the green light at the end of the dock is a daily reality. I see the face of a young boy in a run down neighborhood in Hebron desperately trying to sell me a bracelet for a few shekels. These interactions raise strong questions about any identification I might think I have with this beautiful and complex country. Clearly, this  is a trip that  I, like our students, will also be thinking about and learning from for a long time to come.
– Photos by Ian Baumgardner ’14