Professor Gilberto Gomez – Mr. Elias J. Jabbour is a kind gentlemen of sharp eyes, a generous smile, and a big heart. Almost 80 years old, he however is energetic and passionate about the possibility for peace and understanding in a troubled world. A descendent of the Canaanites who inhabited the lands around Nazareth from times immemorial and a self-defined optimist, Mr. Jabbour runs the “House of Hope” in the living room of his modest home in Nazareth, where he took our entire group for a convivial lunch prepared by his wife and grandchildren. It is a rectangular room lit by fluorescent lamps and adorned with handmade sings. “Love,” “Faith,” and “Hope” are all in English. There are also signs in Arabic and in Hebrew. Another sign wishes us a “Happy New Year in 2007.” The food is delicious, and Elizar goes around the table to make sure all students Andes accompanying faculty try the hummus that is served in small dishes. “It is made with the best olive oil in the world,” he says. 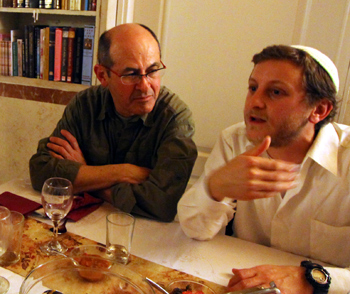 Mr. Jabbour is a minority within a minority: a Christian Palestine. He has devoted his life to the search for understanding and reconciliation in present day Israel. He bemoans the walls, physical and mental, that separate the various communities throughout this small country, and finds that situation extremely abnormal in a land in which the three major religions, which all share a common core, managed to coexist for centuries. An “optimist at heart,” he thinks there is not only room for reconciliation but a dire need for it. “We will be here together, or we will not be able to be here at all,” he says indicating that there cannot be a “solution” that excludes others. He doesn’t particularly blame one group or other. “We are all humans and thus all different,” he says, adding “we need to live with our differences and learn to love them, why does it have to be so hard? We are humans, and sometimes not the best humans.”

He emphasizes that only through the opening of the heart can a stalemate of decades begin to be solved. He laments that Jewish and Palestinians, although living next to one another, find it so difficult to meet and interact. Children, for example, go to separate schools. The town down the road from Nazareth is Jewish and is only three miles away, yet no one from Nazareth ever goes there, no one from there comes to Nazareth, perpetuating a separation that is lasting too long. Most dire, in his view, is the situation of Christians in the Holy Land, large numbers of whom have migrated and continue migrating elsewhere. If the situation is not changed, he thinks we will see a paradoxical situation where the  Holy Land, the place where Christianity was originated, will be devoid of Christians.

“Hurry up and eat more hummus,” he reminds the whole group now. And then he reveals the secret of why it is the best hummus in the world: “It is made with olive oil that I myself produced,” he says with a coy smile. Now, there is hope in this world.