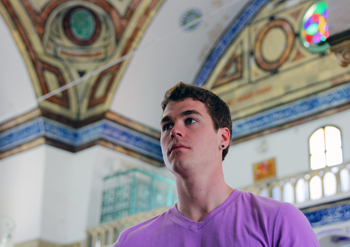 Joe Jackson ’14 – I wish that I possessed the skill to paint an adequate picture in 500 words of the side of the world I’ve seen here in Israel, but I do not. Although I know that I cannot do my experiences of this country justice, I would still like to try and capture to some capacity the history and the importance that is found here. Despite the fact I could talk for days about the breath-taking sceneries, armed soldiers on street corners, ghettos, Israeli women, food, the prevalence of Americanization, or that doing any of these things would only be getting at the tip of the iceberg. Most notable though, for me at least, was the fact that in two days I was able to visit the most revered places of all three of the world’s major, monotheistic religions. Between Al-Aqsa, the Wailing Wall, the Church of the Holy Sepulchre, and the Church of the Nativity, I was blessed with an opportunity to experience a part of history in a way many people only dream of.

We started yesterday by visiting Al-Aqsa and the Dome of the Rock, the holiest mosque and one of the surrounding structures placed by Muslims on what the Jews and Christians refer to as the Temple Mount. Disregarding the conflict that surrounds the history of the location, the mosque itself was impressive to say the least. By a stroke of luck, we were actually granted access inside both Al-Aqsa and the Dome of the Rock, something that rarely is allowed for any non-Muslim. What I found to be particularly interesting, was that it was abundantly clear the majority of Muslims did not approve of our admittance into their sanctuary. From the time we took our first steps into the building, we were greeted with unaverted gazes and we actually left the building to frantic shouts from women that are traditionally directed at intruders of the mosque. As a practicing Christian, this place did not speak to me on too much of a personal level, but the response of the Muslims to our presence served as a testament to the sacredness Muslims feel towards the site. 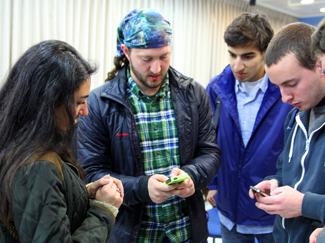 Wabash guys on the cells with Israeli students.

Visiting the Wailing Wall, arguably the most-important site to a present-day Jew, proved to be a comparable experience to that of our visit to Al-Aqsa. Although we hardly left to chants directed at our presence, I must admit I still felt a little out of place due to others’ stares and facial expressions. If you know the history of the Wall, the site obviously does not hold much significance for a non-Jew. It stands to reason then, that a traditional Jew might not get overly excited at the idea of having to share the remaining fraction of their Temple with a bunch of tourists, so similarly to the Muslim response, the Jewish response I perceived was understandable. Much like I felt the next morning at Al-Aqsa though, despite not having any religious connectedness with either site or feeling any religious epiphany, it was impossible not to feel something in the pit of my stomach. There is honestly no other way to describe the feeling or to explain it, but between the beauty of the structures themselves and the histories surrounding the structures that date back to the beginning of human existence, it’s hard not to feel something.

Surprisingly enough, visiting the Church of the Holy Sepulchre and the Church of the Nativity did not do too much for me than did the other sites I have mentioned. A part of me wishes that I could say I had some life-changing experience, but I did not. I knew what I believed before coming and I suppose I’m happy that simply visiting a site did not change that. That being said, seeing the place where my savior was born, died, and buried, did do something. I felt connected to the history of my faith and to those that share my faith, and seeing all the others worshipping and admiring in the same building I was solidified all that I already believed.