Cody Buresh ’15 – Looking back over the experiences of this trip I am extremely grateful and amazed that this group of Wabash men have had the opportunities to go on many adventures such as: staying on the shore of the Sea of Galilee, visiting the city of Jericho, having the privilege to tour the Al-Aqsa Mosque and the Church of the Holy Sepulchre, and many other mind-baffling occurrences. Today we had the privilege to travel to the Western bank to the small town of Bethlehem. Throughout the day we gained a plethora of information about Bethlehem during biblical times and also the current situation from our visit at Bethlehem University. 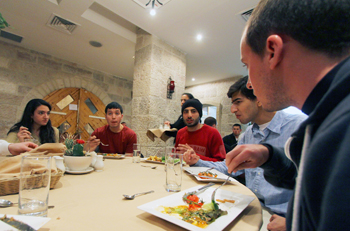 I am going to be focusing mainly on the knowledge that we gained about the biblical period from our experiences today. The weather was not cooperating today. It decided it would be another good day to rain and be cold, all of our wet feet did not agree. Our plans were to (first) travel to the actual location where Jesus Christ was born and view the manger, but surprisingly the Prime Minister of Great Britain (David Cameron) also had the same idea so we had to make a quick change. We headed to the Shepherds’ Fields within Bethlehem that was specifically dedicated to the shepherds depicted within the nativity story. The beautiful small church is absolutely breath taking and was cleverly designed by Italian architect Antonio Barluzzi. I thought it was quite intriguing that all of the fixtures within the church served purposes, which are absolutely amazing tour guide Habib explained. The church was designed to have only one high point in order to represent a tent that the shepherds would live in. There also were many spaces within the ceiling to allow the natural light to illuminate the room representing the star light and also the light of the heavenly host. If our tour guide were not with us we would not have noticed the importance of the design and the significance of the fixtures within the church. Habib simply amazes all of us with the amount of knowledge that he possesses about all of the scared places within Israel. He is without a doubt the best tour guide within all of Israel and today he showed all of us why.

After we were finished taking pictures of the incredible Franciscan church we made our way to a natural cave close by. This is the location that showed the entire group how fortunate that we have Habib as our tour guide. When we first entered the cave there was another group of tourists within. There tour guide was explained to them how shepherds used caves to live in because when it is warm outside it is cool within in the cave and vice-versa with cold weather. Once the other group left the cave Habib informed us that there is much more to the story of the shepherds. All of the information that follows is all from our tour guide, Habib. 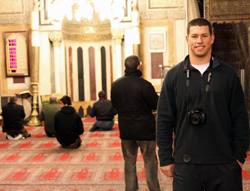 The shepherds of Bethlehem were in charge of raising sheep for the temple sacrifices. According to the laws of the time the sheep that were used for the offerings had to be a one-year-old male sheep that had been outside for 365 days (one-year). Since these sheep needed to remain outside the shepherds were also outside, not using the cave during the awful winter (rainy season). You can see this in Luke 2: 8, “That night some shepherds were in the fields outside the village, guarding their flocks of sheep”. Once the sheep were of age the shepherds would bring them to the city of Jerusalem to be sacrificed for the Sabbath (Friday). It was important that the sheep that was to be sacrificed did not possess any blemishes (broken legs, or injuries). Once the sheep’s blood was completely spilled for all of the sins the priest would return to the people and proclaim, “It is finished”. When Habib was explaining the many intricate steps of the sheep’s life I was astounded by the parallelism to Jesus Christ. He was born in the small city of Bethlehem. When his time had come Jesus was led to Jerusalem to be sacrificed. It was extremely important that he did not have any imperfections (blemishes). On Sabbath Jesus Christ was crucified and gave up his life. He proclaimed, “It is finished”, and then passed away.

I personally was not knowledgeable to the depth of the parallels between the sacrificial lamb from Bethlehem and Jesus Christ. I want to thank Habib for helping this entire experience come to life for this group from Wabash College. The information learned from Habib will not be forgotten and has helped the biblical passages show new life. Thank you Habib.