Isidro Vargas ’14 – Over the last few days I’ve found myself stuck in a troubling routine. Waking up too early, feeling unrested, and staying up too late, anxious in anticipation for what the next day might bring. As I lay here typing, it’s still hard to believe that just this morning I walked though some of the most sacred religious sites the world has to offer. Our Wednesday journey included: An early morning tour of the Temple Mount, where we received exclusive access to the Dome of the Rock, and Al-Aqsa Mosque, two of the holiest sites in Islamic tradition (excluding the Kaaba). Before the sun could reach its highest point we had also made our way to the Church of the Holy Sepulcher; which contains, according to tradition, both the Tomb of Jesus Christ, and the site of his crucifixion. 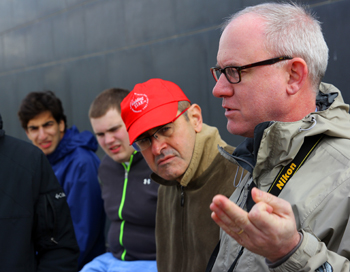 It’s such a blessing to have visited some the sites of which most Christians and Muslims can only dream about; sites, which beforehand, I had only been able to picture from textbooks and personal research. I have to say that this experience is both everything I expected it to be, and so much more.

As our Wabash group has made its way though Old City Jerusalem we have found ourselves in a new world, one which we are still struggling to understand. In the Al-Aqsa mosque, for example, there is a display case holding bullet shells and tear gas canisters from the 1967 Sixty-Day War, but the reality is that at any moment Israeli armed forces could potentially strike Palestinians in this holiest of sites. Throughout the city one can still find the scares of bullets on the bricks of walls and gates, a permanent reminder of the tensions between Israelis, Palestinians, and other pseudo-religious-political groups. As many of my group members pray and hope for an end to these conflictions, we have also found some peace in the individuals we have met throughout our stay. Individuals who have welcomed us to their home, and treated us with the type of respect we hope they will one day project towards each other. 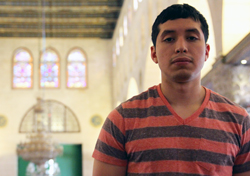 To conclude our journey, we would make a visit to see Yad Vashem (holocaust research center) and the Dead Sea Scrolls, which are held at the Israel Museum. These final points in our itinerary are seemingly appropriate. The Dead Sea Scrolls contain the old oldest known manuscripts of the Old Testament or Hebrew Bible. Thish as been the primary text of my religious endeavors over the last four years at Wabash, and I am ecstatic to see the proof of religious antiquity for my own two eyes. At the same time visiting the Holocaust History Museum in the same land where Jews continue to be persecuted really hits home; serving as a final reminder of just how low humanity as fallen into sin, and why these so called ‘foreign’ matters need to be addressed, rather than brushed off as if the problem will solve itself.