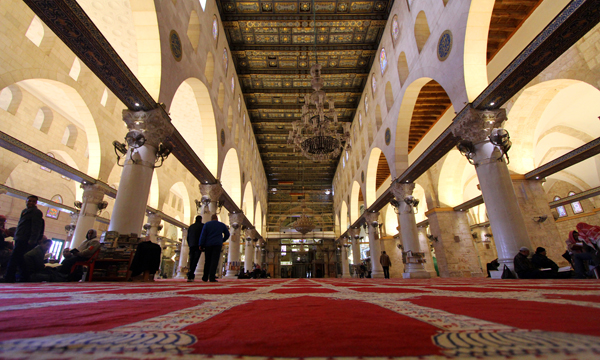 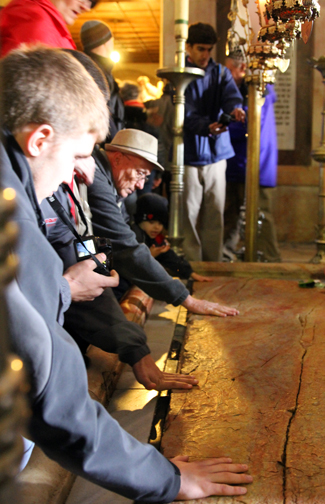 Austin Budell ’15 – I write on this cold and rainy day from the holy city of Jerusalem. Three of the sites we visited today constitute the “climax” of our immersion trip — The Dome of the Rock, Al Aqsa Mosque, and the Church of the Holy Sepulcher. Non-Muslim tourists rarely receive the opportunity to enter the Dome of the Rock, but we enjoyed the privilege of exploring the sacred site. The Dome of the Rock (located on the Temple Mount) is highly contested for a variety of reasons. First, the rock is located over the site where Abraham was (traditionally thought) about to sacrifice his son. Whether this son was Isaac or Ishmael is the object of dispute. Muslims regard Ishmael as the son to be sacrificed, while Jews believe it was to be Isaac, who would later father the nation of Israel. The site is also disputed by Jews due to the Dome’s location on where the former Temple sat. Considering that the Temple Mount is the most sacred place to Jews, it is not surprising that both Jews and Muslims continue to dispute ownership.

Al Aqsa Mosque, also lying on the Temple Mount, is considered to be the third-holiest place to the Muslim faith. Built in 705 A.D., Al Aqsa is one of the oldest mosques on earth. The significance of the site is associated with the Prophet Muhammad’s Night Journey, mentioned in chapter seventeen of the Holy Qur’an. After making this journey, the Prophet instructed his followers to begin praying towards the direction of Jerusalem (which was later changed to Mecca). The controversy surrounding this site is two-fold. First, the Prophet Muhammad made the Night Journey in approximately 621 A.D., where he traveled from Mecca to Jerusalem in a single night to “the farthest mosque,” or Al Aqsa mosque. This begs the question of how the Prophet Muhammad could have traveled to Al Aqsa Mosque before it was even constructed. The second object of dispute is, again, its location on the Temple Mount, the holiest site to the Jews. Thus, Al Aqsa is a contested site on both its legitimacy in context of the Night Journey and on its location of the Temple Mount. 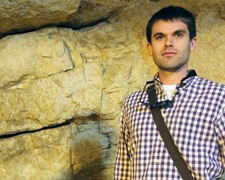 Budell in the Mosque

Perhaps the most peculiar of all the sites we visited today was the Church of the Holy Sepulcher. This church is thought to house the location of the last five Stations of the Cross, being the division of the garments, the nailing to the cross, the crucifixion and death, the taking down from the cross, and the laying in the tomb. Each station is associated with a unique relic or legend related to a specific station, the most prominent being a tomb where Jesus was thought to be buried. Upon entering the church it was readily apparent that the features were of Greek-Orthodox characteristic, evinced by the elaborate mosaic portraying Christ’s death and the abundance of distinctly Greek candle holders hanging from the ceiling. Upon further investigation, however, it became clear that a variety of Christian sects had laid claim to this site. 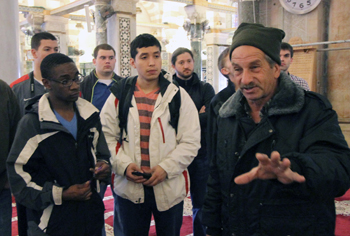 Tour guide assures students he knows “all the answers.”

After climbing to the second floor of the church, you could actually see where the line dividing Roman Catholic and Greek-Orthodox jurisdictions occurred. The right side was apparently Roman Catholic, as its minimalist layout stood in staunch contrast to the many ornate candle and incense burners occupying the ceiling of the Greek-Orthodox side. Our guide later stated that six Christian sects have a claim to this site; the three major sects being Roman Catholic, Greek-Orthodox, and Armenian, with the minor three being Coptic, Syrian, and Ethiopian Orthodox. All six of these Christian branches occupy a space or shrine within the Church of the Holy Sepulcher, which demonstrates how this site is contested among Christians.

With the fifth day of our journey in the Holy Land coming to a close, I cannot help but realize how eye-opening of an experience this immersion trip has been. Between speaking with the locals, traveling to holy sites, and experiencing local cuisine, I feel like a world away from good old Wabash. Overall, the trip has been totally worth the jet lag and sleepless nights with early mornings, and I would strongly recommend anyone interested in making a pilgrimage to Israel to do so.