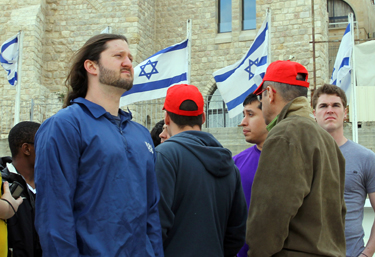 Logan O’Connor ’15 – Jericho is the oldest city in the world, estimated to have been founded in 8000BCE. So it was really really interesting to visit this site. The ruins of ancient Jericho look like a giant mound of dirt, but this is because it has not been excavated very well. The excavations that exist have uncovered the oldest building in the world (10,000 years old) and there is also the remnants of the northern gate of the famous Wall of Jericho. The most interesting aspect about the site is the view. It is located within a valley that is 450 meters below sea level, and the view from the top of the mound is borderline incredible.

More important than Jericho though, is the plight the Palestinian people face. When people talk about Apartheid it is assumed that you are talking about pre-1990’s South Africa. But there is Apartheid in Israel as well. The Palestinians are militarily confined to the West Bank by Israel. It is also considered a felony for an Israeli to enter Palestine. In that sense it is Separateness-which is what Apartheid is. The cities in Northern Israel are very affluent and modern, but travel no more than 30 miles south and the conditions the people live in are a world apart. Palestine has the look and feel of a third world country, yet Israel is a very modern pseudo-Western country. While neither side’s hands are clean in the struggle, Israel’s are far dirtier. 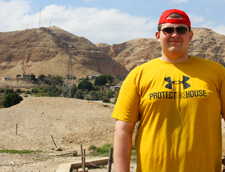 The claim that the Israelis have over their land is bogus. You do not get to claim inheritance to a land that you have not been in full control of for 2500 years. The Old Testament is not a valid legal claim to land. Additionally, according to the Old Testament there was/is a contract between God and the Jews. God did not give the ancient Hebrews the land that is now Israel for free, there were terms that were agreed upon. The Hebrews violated this contract many times. In fact, the violation of the contract is a central theme in the Old Testament. The ancient Hebrews were forbidden from worshipping other Gods and human sacrifice, and yet this is exactly what they did over and over. The original Temple built by Solomon had altars to other Gods in it. The standard theology is that the Hebrews were conquered by the Babylonians because of the breach of contract. Furthermore, the Palestinians inhabited the land prior to 1948. What the modern nation of Israel has done is a mix between how the Europeans treated the indigenous population of the New World and Apartheid South Africa. The Israelis stole the Palestinians land, and now confine them to the desert.

The state of Israel is incredibly hypocritical. For a people who have been known for not having a home and being persecuted, you would think that they would not exile others from their homeland and persecute them. Yet that is what is happening here. In that sense modern Israeli’s are incredibly myopic. And America sides with the Israelis in the separation of the West Bank. Which is a shame, because that goes against everything that America is supposed to stand for. But I guess money rules all. Just because you had land 2500 years ago is not a fair reason to treat the people who rightfully live in the land you want like garbage. Both sides could have peace, but unfortunately there is money in war. This is a problem that will go on and escalate for the foreseeable future, and it is a shame because this country is unbelievably beautiful. The land that is Israel should be shared, not fought over. I am fine with the Jews living in Israel, but their claim to the land is much weaker than the Palestinians, who had lived in the land for hundreds of years prior to 1948.