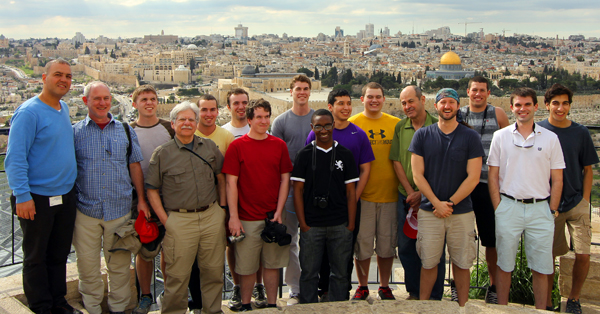 The Israel Immersion trip class with Jerusalem in the background.

Zeno Joyce ’14 – Even with the title of our class being “Contested Sites, Contested Texts”, I wasn’t sure how my life’s contestation would even fit or if it were even applicable. But I too would realized, I am not alone in this struggle of faith. 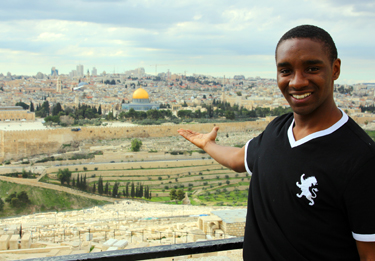 I never knew how moving this experience could be until today. I struggled to sleep in Capernaum, waking up at 12am, 2:30am and finally 5:30am, feeling empty that I had not joined my comrades in their visit to the Sea of Galilee. So at 5:30, I went to the bank at the Sea of Galilee, with hopes that the sun hadn’t risen.

Fortunately, I was able to mediate and pray as the sun slowly breached the horizon. Then immediately my mouth began to sing songs from church, those about the goodness of Jesus and the inability to complain because of His sacrifice. I was filled with so much joy, in that I could feel and hear the words of my Grandmother – whom I know would have cherished this opportunity and is the reason for my religious commitment.

After leaving the Sea of Galilee, we went to the site where Jesus was baptized near Jericho. It was here my emotions would get the best of me.

I was blessed to meet a fellow brother from Uganda, whom too is a Christian. We conversed on our birthplaces and how we both envy one another. He expressed to me that despite the negative image and stereotype of African American – African, we are connected by faith and that is all that matters. I was moved by this candid nature and quickly jotted down his contact information, seeing that I only had 1 minute to make it back to the bus. 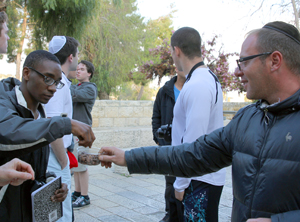 This interaction exposed me internally. I too have personally contested my African and American identity. As I sat on the bus on the way to Jerusalem, all I could do was think about how much love I was shown by a complete stranger despite all my personal uncertainties. My eyes began to flow with streams of emotion and love, as I was reminded of Jesus and the Apostles on the Sea of Galilee. Our tour guide Habib, had pointed out earlier in the King James Version that the apostles are called children by Jesus. Unlike other translations that say Jesus called them friends, this is not the case because they too learned from Him.

This stood out to me, not only because I learned the ages of the apostles, but in that they too needed to learn and grow just like all of us. Not only have I been exposed to new culture and traditions, but I have learned that we all are children of God—not matter your color, creed, race or religion. As a religion major, this trip to Israel is the apex of my Wabash journey.