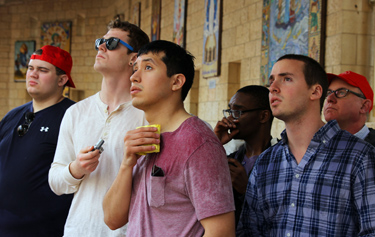 Wabash students at the Basilica of Annunciation, Nazareth

Kalp Juthani ‘15 – Shalom from the Sea of Galiliee! Today, we had the opportunity to tour Nazareth and learn from a Palestinian Peace Activist in Shefar’am; both of which challenged me to rethink the conflict that has plagued Israel for centuries. We started the day in Nazareth, where we visited the Basilica of the Annunciation. After weaving our way through local markets to avoid the pouring rain, we entered Basilica and were stunned by its magnificence.  Light from its stained glass windows bounced off of the floors and illuminated the church with an absolutely beautiful assortment of colors. The central dome dominated the hall, protecting a grotto beneath it. Roman Catholics believe that its location is the site where the angel Gabriel visited Mary to announce that she would conceive Jesus. In many ways, the beauty of the church induces a feeling of spirituality and left us all with a powerful experience. 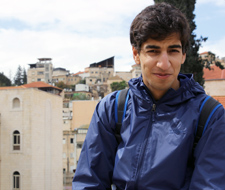 We climbed up a spiral staircase in the basilica and found numerous mosaics depicting Mary from different parts of the world. As we explored the main hall, the Muslim call to prayer could be heard in the distance. The sound echoed through the church but it did not seem to disturb any of its rituals inside. A few minutes following the call for prayer, we heard monks reciting Latin chants and large bells ringing from the churches towers. This is when it all finally began to connect for me. The religions were competing against each other with sound. It was clear that both Muslims and Christians wanted to be heard in the city. The competition didn’t just end here. We were then taken to a site holy to Muslims on an adjacent lot and encountered a site of contestation. We learned that the Muslim community had intended to build a Mosque on the site to celebrate the life of a holy man but had been denied permission to do so. The rivalry between the two religions has become central to the life of the people of Nazareth and their fight continues to dominate every scene in the city. 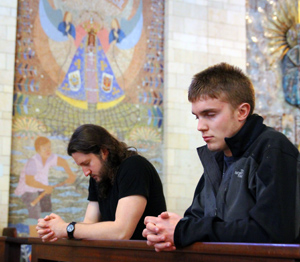 We continued our afternoon in Shefar’an, an ancient town that overlooks Haifa. Despite sharing a history that is shrouded with myths involving events in the life of Jesus, the town was completely isolated from other pilgrimage sites. We drove through narrow alleys, passed an abandoned synagogue, and arrived at the House of Hope, where we met Elias Jabbour, a Palestinian peace activist. For many of us, he immediately shattered our presumptions about Palestinians in the region. Mr. Jabbour was a Christian and argued that the earliest Christians were also Palestinians. What surprised me was the large number of Christian Arabs in Israel. I have met a few Christian Arabs in the states and have always assumed that the vast majority of them fled persecution and ended up settling outside of the Middle East. This is definitely not the case. They receive very little recognition from other Christians and continue to be fragmented by the Arab Spring.  I am certain that the pilgrims that we encountered in Nazareth have similar assumptions if not worse ones regarding Arabs.

Before I begin preparing for tomorrow’s exciting day in Jericho and Jerusalem, I wanted to thank everyone that has made this experience possible. It has been beyond anything that I could have imagined.