Ramsey Bradke ’14 – Today was easily the most fulfilling and engaging day so far on the trip. Before we left the beautiful and quiet city of Haifa we enjoyed yet another delicious and colorful Israeli breakfast. Breakfast in Israel is my favorite meal of the day because of the diversity and color of the food. Green and purple cabbage, freshly squeezed juice, bread spread with hummus and paprika, watermelon, steamed carrots, and beansprouts. Although breakfast entrees are fundamentally different than one would find in America, Israel wakes us up with fresh vegetables and fruits rather than meats and eggs. A different but enjoyable change of pace. 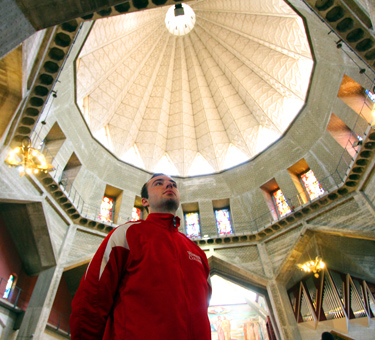 Our first stop today was a Greek Orthodox Church where Mary allegedly was informed by the archangel Gabriel of her mission to bear Christ, then a Basilica dedicated to the Virgin Mary in the city of Nazareth. The Orthodox Church was a historical spectacle. As we moved closer and closer to locations where Jesus and his mother may have walked and talked the significance of the trip really began to sink in. It became easy to sympathize with the holiness and spirituality that this country projects. The Basilica of Mary was equally as impressive. Outside the church were depictions of Mary and the young Christ from at least 50 different country’s perspectives. The Chinese and Ethiopian depictions, for example, used paintings or mosaics that depicted the Virgin and Christ as native Chinese or native Ethiopian. Although this seemed odd and blasphemic to me at first, Dr. Royalty assured me that this was completely acceptable within Catholic dogma. Catholics, who wished to become a universal faith, saw these different depictions as no different than translating the Bible into different languages such as English and Spanish to relate to peoples all over the world. 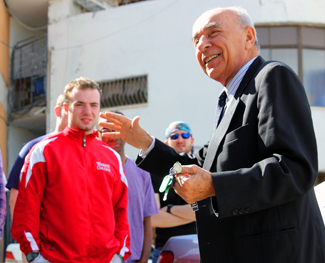 My favorite part of the day though was our lunch and conversation with Dr. Royalty’s colleague from the Palestinian House of Hope. This organization, which was based out of a small home, was a run by a Palestinian Christian family and leader, Elias Jabbour, whose aim was to bridge the division between native Palestinians and Israelis who have been unable to come to a territorial or spiritual consensus over the years. This man’s conviction, kindness, and positivity was unnaturally contagious and engaging. His smile and family’s hospitality truly impacted me. We were able to ask him questions about the peace process and he gave us some striking and surprising answers. His main concern was the persecution and diminishing population of Christians in countries like Syria, Egypt, Iraq, and Iran. Although he applauded the Arab Spring’s movement for democracy, he decried the silence from the West with respect to its voice for the Christian minorities being killed and persecuted through the process of revolution. He also was very convicted in the assertion that Christianity had its roots and origin in the land of Palestine, a notion myself and others have seemed to forget or not recognize. His firmness coupled with his positivity and kindness were unbelievable. Not to mention the delicious homemade Palestinian lunch his family made us!

To finish the day we traveled to the shores of the Sea of Galilee where I am writing currently. This is where Jesus is said to have performed miracles and walked on water. Being able to put my feet into the Sea of Galilee and look at the two sides of land where Jews and Gentiles once lived during Jesus’s mission reaffirmed my excitement and awe from this trip. It is impossible to ignore the spirituality and history this land provides. I am anxiously awaiting our journey to Jerusalem tomorrow.